Why KTN’s LINDA OGUTU will forever curse October, see what happened to her lover, DENNIS.

Lindah Ogutu husband. Curvaceous KTN anchor, Lindah Ogutu, will forever curse 31st October 2015. This is the day her wealthy boyfriend, Dennis Mombo, who is the Managing Director of Mwananchi Microfinance Limited, was tortured and nearly killed after being kidnapped by thugs who demanded a ransom of Ksh 20 million.

Mombo was kidnapped as he was accessing his posh home in Mountain View and taken to an apartment in Kileleshwa.

The eight armed kidnappers, who included a Youth Coordinator for ODM, robbed him of Ksh 80,000, a wrist watch, a gold ring and an iPhone, before demanding a ransom of Ksh 20 million.

He was held for five hours but was rescued by flying squad officers who arrested the kidnappers and recovered two guns in the apartment. 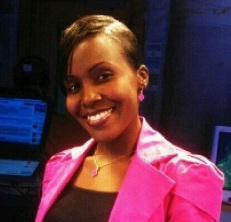 Ironically, detectives discovered that one of Mombo’s employees colluded with the kidnappers and is alleged to have been communicating with them hours before he was kidnapped.

Linda’s boyfriend was arrested on 21st August 2013 after a lot of flashy cars were found in his house and detectives connected him to a car theft syndicate. It later turned out that Mombo engages in a shylock business where he gives people loans and uses their cars as collateral. Whether the two events are connected is a story you have to keep checking DP as we dig more. Meanwhile, below is a photo of the masterminds of Lindah Oguttu’s boyfriend’s kidnapping.