Is God cursing WETANGULA? Love for S£X forced him to do this to a poor man in Nyeri.

Bungoma Senator, Moses Wetangula, has been on everyone’s lips after word got out that he is involved in a domestic wrangle with his wife, Anne Waceke Ngugi Wetangula, a no-nonsense woman who hails from Nyeri.

As the debate on Wetangula’s domestic squabbles rages on, a little bird whispered to us that he snatched Ann from a poor farmer in Nyeri and brought her to the leafy suburbs of Nairobi.

They started their affair when Wetangula was a powerful Minister.

The controversial Senator bought Ann a house in Nairobi where she lived alone but after some years, he moved her to his residence in Karen after his first wife ran away.

Wetangula has been living with Ann but he is now regretting why he snatched her from another man after he was given a dog’s beating that forced him to record a statement with the police. 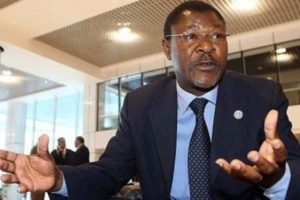 Ann has ended up embarrassing Wetangula badly since every-body now knows that he is a coward who pretends to be brave while speaking in public but when he arrives home, his wife treats him like a small boy.

As they say, what goes around comes around.