In 2007, the defunct Electoral Commission of Kenya (ECK) set up a tallying centre at the Kenyatta International Conference Centre (KICC) where goons associated with ODM and Party of National Unity (PNU) started violence that claimed 1,300 lives and over 500,000 were displaced.

In 2013, IEBC set up a national vote tallying centre at Bomas of Kenya and the election was conducted in a peaceful manner.

But since politicians are currently beating drums of war and sharpening their venomous tongues, the IEBC has decided to set up a national tallying centre at one of the safest places in Kenya. 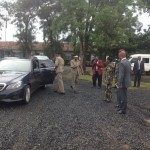 Multiple sources from IEBC said that the national vote tallying centre will be at the GSU headquarters along Thika Road, and only authorised personnel will be allowed to access the venue.

“Only presidential candidates will be allowed inside the facility,” a source said.