Lilian Muli has taken away the breath of many viewers with her looks and sheer stage presence.She is Citizen TV’s news presenter and also hosts the popular Fashion Watch Show.

One memorable Friday afternoon (November 28 2008), a stranger showed up at the KTN offices. It was just minutes after the lunchtime news bulletin and one of Kenya’s most talked about news anchors, Lillian Muli, had just completed her routine news reading.

To her, it was just another ordinary afternoon at the KTN studios. But this tall stranger bearing a cake, a bouquet of flowers and a tiny box was set to change Lillian’s day.

Before her colleagues, Lillian’s love-struck boyfriend of four years went down on
one knee, reached out for her hand and said the magic words: “Will you marry me?” What followed was an emotional scene. Lillian burst into joyous tears and turned the newsroom into a scene straight out of a Mexican soap opera.

A few minutes later, Lillian was showing off an engagement ring from her husband to be, Moses Njuguna Kanene.

Lillian and her fiance tied the knot in a colourful garden wedding held at Windsor Golf Course. The wedding was presided over by Pastor David Kabibi. 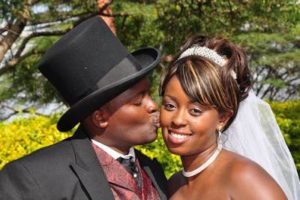 Lilian Muli has one child from her marriage. 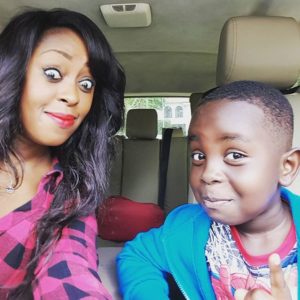 She was in a violent marriage where she was battered by her husband.

Lilian  confirmed that she had indeed divorced her husband on live TV.
This was during her popular One on One interview, where she hosted veteran journalist, Jeff Koinange.

After the interview, Jeff gave out two copies of his autographed biography; one for a fan and the other one for Lillian. But when Lilian was asked by Jeff whether he can write her husband’s name on the copy, she quickly answered,

Muli is her father and this was an indication that she doesn’t want anything to do with her ex-husband.

sources indicate that she is ready to be married as a second wife to Shabana FC Chairman, Jared Nevaton.