Citizen TV’s ANN KIGUTA is pregnant; we reveal the name of State House official behind her pregnancy.

Ann Kiguta and Jomo have been dating for over a year and we all remember how they stepped in style late last year during the Premier of James Bond’s movie, Spectre.
A source at Citizen TV confirmed her pregnancy and said that she has been hiding her growing baby-bump by rocking over-sized trench coats

“Nowadays she is often spotted in over-sized trench coats and scarves and opts to present the news while sitting down. And if you watched yesterday night’s bulletin you can attest to this” the source disclosed.

Ann already has a daughter from her past relationship with an abusive boyfriend and this will be her second child. 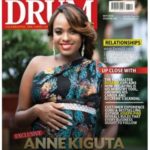