SHOCKING REVELATION! BABU OWINO is a thug, he killed Youth Fund driver in cold blood with help from UHURU’s friend.

Babu Awino involved in Youth Fund driver murder. The ongoing investigations into the corruption scandal at the Youth Enterprise Development Fund (YEDF), which saw a driver killed in cold blood for eavesdropping on what he was not supposed to hear, has taken an interesting twist.
There is new information that SONU Chairman, Babu Owino, was involved in the cold murder of a Youth Fund driver, the late Simon Mwangi.

The details emerged before the Pubic Investment Committee (PIC) which is investigating the matter.

According to information availed before the committee, the sacked Youth Fund Chairman, Bruce Odhiambo, who is President Uhuru Kenyatta’s long time friend, in collaboration with Babu Owino and Director Clement Ayungo, murdered Simon Mwangi to cover up the theft of sh180 million among other corrupt deals.
The committee directed the directorate of Public Prosecutions to investigate Bruce Odhiambo, Babu Owino and Clement Ayungo for the brutal murder of Mr. Mwangi. 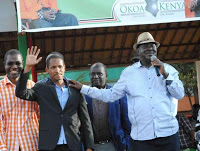 Mwangi was killed in South Coast under unclear circumstances when he was in the company of Clement Ayungo.