Bob Collymore is the CEO of the leading telecommunication company in Kenya. He started earning money at the age of 12 and landed his first real job when he was 16, working in a departmental store in the UK.

Before Safaricom, Bob Collymore also worked as the Chief Officer – Corporate Affairs at Vodacom and Governance Director, Africa at Vodafone.

Safaricom CEO Bob Collymore finally said ‘I Do’ to the love of his life Wambui Kamiru, who’s an artist, and the founder of The Art Space, an Independent visual art space that comprises of a commercial gallery and alternative show spaces.The wedding was held at a private residence in Kitisuru. 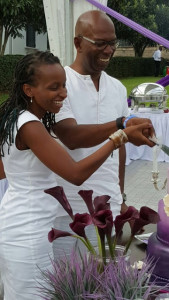 His ex-wife is a white lady and when he first arrived in Kenya, she was with him. They actually even sat down for an interview with Citizen TV.

Safaricom CEO Bob Collymore declared his wealth, saying that he earned about Sh100 million in the last 12months and has property and shares worth over KSh200 million.

Bob Collymore has died today being 1st July 2019 at his home in Nairobi after battling cancer. He has died at age 61 and has left behind a wife and four children. 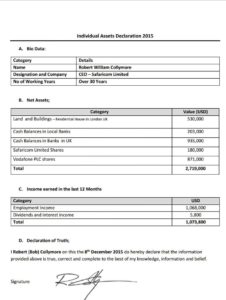 The wedded wife to Safaricom CEO Bob Collymore was once married to a strong strapping Kenyan by the name Joseph Kenyua. The two were married for close to five years before their marriage hit the proverbial ‘rocks’. Joseph Kenyua, a graduate from the University of Liverpool.

Kenyua is the owner of Kenwest Cables; which deals with a local contracting company that focuses on the manufacturing, sale and distribution of electrical copper and aluminium cables and conductors.

Kenyua and Wambui were blessed with twins however she moved out when they were 5 years old. The twins still live with their mother to date although they get to meet their father over weekends. The break up left Kenyua devastated; he quit his job but years down the line, he seems to have coped with life.

Born in a wealthy family, Joseph Kenyua is a household name in the football industry and he is known for his passion for football. He coaches young kids and he is the organizer of Amateur Football League.