The story doing rounds on social media and published by a weekly tabloid, has been revealed to be campaign propaganda.

Speaking exclusively to The Nairobian, Lebo Boshomane, who is The Sowetan editor said his paper did not write the story. He said that someone could be using their paper’s reputable name to spread propaganda in Kenya.

According to the story that was purported to have been published The Sowetan, Raila allegedly visited a prominent sangoma (witchdoctor) to help him win elections. The story further claimed that Raila was accompanied by his wife and other Orange Democratic Movement top honchos. The story quotes “a highly-placed ODM source” and is illustrated with a Photo-shopped picture of Raila in traditional regalia.

“Please note the article attached in your previous email does not belong to us. We do not have and have never had a reporter by that name either,” Boshomane clarified.

The Nairobian can now reveal that the story was planted by a state operative who paid a newspaper editor a measly Sh150,000 to run the defaming piece.

The word agwambo is Luo for ‘mystery’ or ‘the unpredictable.’ Grace revealed how her family donated the name to Raila in the 1980s. She said that her family and that of Kenya’s first vice president Jaramogi Oginga Odinga were very close when Jaramogi joined the opposition.

She added that Jaramogi and Akumu shared a lot in politics, and occasionally visited each other as they stayed in the same neighbouhood at Jericho estate in Nairobi, apart from the many encounters in political arena.

In the late 1980s after Raila was released from detention, Grace said, the son of Jaramogi never hesitated to visit her family .

“He (Raila) had just come from detention, and he was coming to visit us when he lost his way to our house. He then tried to enquire from the neigbours,” said Grace.

She added: “Most of the neighbours referred to my husband as ‘Baba Agwambo’ (Agwambo’s father) since I had a child named Agwambo. So the neighbours brought him to our house.”

Grace noted that Raila was not familiar with the ‘Baba Agwambo’ name as he never knew I had a child with that name, hence when he got to the house, he enquired about it.

“Raila was impressed by the name and as he was leaving, he jokingly said he wished he could adopt it and we let him,” she said. That is how Raila became Agwambo.

A look at Vivianne’s social media pages reveals that she has since changed her name from Vivianne K Sossion to Viv N Viv. She has also deleted the trove of pictures she took of her and Sossion’s children and her wedding. She has even unfriended Sossion’s eldest daughter, whom she used to tag in all her posts on Facebook. Further, she no longer sports her wedding ring. 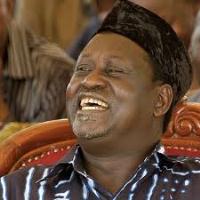