Here is the full statement from RAILA ODINGA naming the Eurobond thieves.

I meet you today with a heavier agenda than the ones we have shared in recent years.

I am here to discuss the Grand Robbery of Kenya by agents of the State, through the much talked about Eurobond.

Hopefully soon, we will meet again to discuss some more pleasant subject.

For the past month or so that I have talked about the Eurobond, I have mainly raised questions. Today I am responding to the answers, actually the thread of lies, the scheme of deception, smoke and mirrors provided by the National Treasury to our own tax payers and to the international community that showed faith in our country and participated in the bond.

I pledged to Kenyans, and I pledge again now, that I will not rest until we get to the Bottom of this “Eurobond” matter.

Until responsibility is assigned and punishment to fit the crime is awarded.

Because this matter is weight, because our dignity and integrity as a nation is at stake, because the future of our children and grand children is caught up in this deadly debt, we have gone all out to engage a Consultant to provide expert evidence on this record breaking robbery. 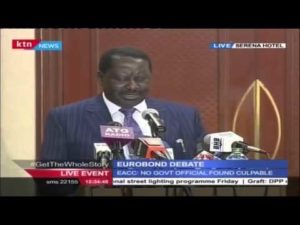 I shall introduce Kenya’s Eurobond in broad terms. The Consultant will then give a detailed presentation on various aspects of the Eurobond. I will then make concluding remarks. Then I will take your questions.

I believe that in the Eurobond saga, we are staring at theft of public resources on a scalenever seen before in our country. The theft has been achieved through international money laundering by elements of the Jubilee Administration, working in cahoots with leading international banks and money laundering experts.

The theft has been executed with the collaboration bankers, lawyers, accountants and a network of intermediaries operating from Nairobi, London, New York, South Africa and even Qatar.

The size and scale of money at stake at USD1 billion dwarfs all previous scandals in Kenya.

The crimes we are dealing with in this scam are universally agreed to be grim ones that pose grave danger to international stability and economic progress to the whole world.

The money raised from international investors with very noble intentions has not ended up in the right accounts for the intended purposes, which raises the spectre of a classic international money-laundering scheme.

In fact, today, we are questioning whether this money came to Kenya at all.

I wish to give you just a bit of history of this saga. The Eurobond saga was preceded with much drama. It began in May 2014 with President Uhuru Kenyatta ordering the payment of debts owed to companies in the Anglo Leasing scam that was pulled on Kenyans many years earlier. We were told payment of those debts would pave way for Kenya to borrow from the international markets.

The payment paved way to the launch of the bond with much fanfare in June 2014. The President assured Kenyans that the loan would make the government stop borrowing from local markets; it would help lower interest rates and lower inflation and cost of living.
Kenya’s first Eurobond Issues was trumpeted as the largest and most successful in Sub Saharan Africa (outside South Africa).

The National Treasury mounted a series of high profile international road shows in leading capitals of finance in Europe and North America to drum up support for the debut Eurobond issue. The results were overwhelming.

The proceeds from the Tap Sales were received in an account at Citibank New York.

The Prospectus stated one of the purposes of the Eurobond Issue was to repay the Syndicated Loan of 604.6 million US dollars.

The most important justification for the Eurobond was to bring down the domestic interest rates and fund the country’s ambitious infrastructure programs in energy, roads and ports.

On 24th June 2014, the full amount of 2 billion US dollars was duly received at the main collection account held by JP Morgan Chase Bank in New York.

After deductions of minor fees and charges the Net Proceeds were acknowledged as received on that date.

On 3rd July 2014, two electronic withdrawals were made from the JP Morgan Chase Bank account. Then, first, some 604.6 million US dollars got wired to Standard Chartered Bank in London, which was described as a repayment of the syndicated loan.

Secondly, some 395.4US dollars was transferred directly back to Kenya and deposited into the Consolidated Fund on the same day.

On 8th September 2014, the balance on the JP Morgan Chase bank account amounting to 999 million US dollars was transferred to an account at a the Federal Reserve Bank, New York.  This is according to a swift transfer statement posted on the National Treasury’s website.

It’s from this point that all hell breaks loose. The detailed part of this presentation will take you through what went horribly wrong.

We have dutifully and diligently studied the movement of Eurobond proceeds. The presentation that follows will show the following:

That there are no bank statements or third party evidence of what happened to the money deposited into the account at the Federal Reserve Bank of New York.

That the proceeds of the Tap Sales of 815 million US dollars were received in Kenya, and were eventually deposited into the Consolidated Fund as required by law.

An amount of 999 million US dollars has to date not been deposited into the Consolidated Fund as required by Law.

Nobody knows whose account it ended up in or whether it came into Kenya at all.
Finally, that the National Treasury has been engaged in an elaborate scheme of deception intended to mislead the Kenya taxpayers that the proceeds of the Eurobond were deposited into the Consolidated Fund, even where there is clear evidence to the contrary.

HOW THE NATIONAL TREASURY BROKE THE LAW.

The National Treasury did not obtain the approval of the Controller of Budget, a Constitutional Office Holder, Prior to making withdrawals from the Net Proceeds of the Eurobond when effecting the repayment of the Syndicated Loan. This is a breach of Article 206(4) of the Constitution. As an interesting aside please note that the Controller of Budget has issued public statements contradicting her Official Reports to Parliament for FY 2013/14 and FY 2014/15.

The National Treasury is also in breach of Article 221(6) of the Constitution, as a direct consequence of the failure to pay the proceeds of the Eurobond in full into the Consolidated Fund.

The key players; the persons of interest in this saga of deceit, collusion and cover up are:
Mr Joseph Kinyua, Chief of Staff, the Presidency and Head of Public Service.

Mr Henry Rotich, the Cabinet Secretary to the National Treasury.

Dr Kamau Thugge, the Principal Secretary to the National Treasury.

The scheme is so elaborate, so thick and so reckless that we believe these officers acted for or on instructions from bosses higher up the Executive ladder. Your guess is as good as mine on who the owners of the plot really are.

Eurobond Proceeds moved through a bewildering array of opaque collection accounts with descriptions changing at the whims of Treasury Mandarins ranging from “Special Accounts”,to “Offshore Accounts: and “Sovereign Bond Account.”

We remain concerned that to date the National Treasury has been unable to credibly explain to Kenyans where the so-called Eurobond money went to, and in particular, which projects were funded by the proceeds of the Eurobond issue.

We have the bizarre situation where the National Treasury Cabinet Secretary in one breadth insists before the Parliamentary Accounts Committee that all Eurobond proceeds were deposited into the Consolidated Fund. Yet, in the same breadth, the Office of the Attorney General argues, in a letter to the Law Society of Kenya, that depositing monies into the Consolidated Fund is optional.

By the Treasury’s own admission 395 million US dollars from the Eurobond Proceeds received on 3rd July 2014 after the end of the FY 2013/14 were spent on infrastructure projects.

The same National Treasury admits obtaining approval from Parliament to borrow KSh.141bn under the Sovereign Bond in 2014/15.

The Purported Transfer Instructions from the so- called Sovereign Bond Account (Account 1000212764) add up to KSh.162.2 billion. The Sovereign Bond Amounts that were not deposited into the Consolidated Fund totals KSh.141 billion.

Something went horribly wrong, and it appears to have been designed to be so.