Jacob Juma was buried holding a Torch and a knife in order to avenge his death a tradition that usually makes the dead avenge his death after 40 days of burial.
Investigations have allegedly been opened to investigate the matter further.

The elder brother of the late businessman, Jacob Juma, has maintained that all those who were involved in his chilling assassination will pay for their crime and will do so very soon.

Speaking yesterday, Gerishon Wesonga, 63, remained adamant that the family will perform rituals for Jacob Juma’s spirit to hunt down his killers and deal with them.

Juma’s family appeared divided on whether or not to perform the ritual that is common with the Butara sub-tribe of the Luhya community in murder cases where the killers are unknown.

“One of his brothers or uncles will descend into Juma’s grave before his body is lowered and utter binding curse words which will ensure that Juma’s killers don’t rest and pay for this heinous act,” said Wesonga.

“In the grave, we shall tell Juma that, ‘You alone know the persons who killed you. Deal with them like a man. Don’t allow them to rest until they pay up for this murder,” he added. 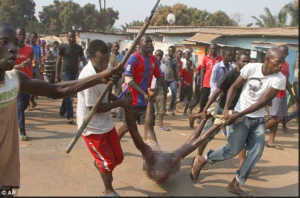 Wesonga also revealed the shocking things that will happen to all those who were involved in the murder of Jacob Juma both directly and indirectly.

“All those involved will pay. Some will become mad, some will be run over by cars and those who fly could end up dying when the aircraft they are flying in catches fire in the sky and burn. This will start happening immediately Juma’s body is laid to rest in our Mungore village soil,” promised Wesonga who spoke on behalf of the family.