Moses Wetangula battered.A report by a Non-Governmental Organisation (NGO) has exposed how male politicians are being battered by their wives everyday but choose to suffer silently rather than tell anyone or even report the matter to the police.

The survey conducted by Maendeleo ya Wanaume has made public a list of Governors, Senators, Members of Parliament (MPs) and those of County Assembly (MCAs) who are battered by their spouses on a daily basis but fail to report the matter due to fear of stigmatization.

The report comes just days after Bungoma Senator Moses Wetangula reported his wife, Anne, to the police accusing her of battering him and leaving him with head, neck, led and hand injuries.

According to statistics released by the organization’s Chairman, Nderitu Njoka, 18 Governors, 13 Senators, 95 MPs, and 346 MCAs are battered by their wives every day but choose to endure in silence.

“Majority revealed that they really undergo both physical and emotional torture from their wives. However, due to the position they hold in the society, they fear reporting to police or even telling their colleagues,” said Njoka. 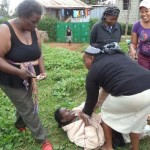 Now you know, it is not just Wetangula that goes through hell between the sheets.