Raila Odinga running mate -It appears former Prime Minister Raila Odinga has already identified his running mate ahead of the 2017 General Elections after dropping former Vice President Kalonzo Musyoka and Bungoma Senator Moses Wetangula, who he allegedly accused of not adding any value to his Presidential bid.

According to sources close to Raila, the former PM could be considering making former Presidential candidate, Peter Kenneth, as his running mate.

A source said the former PM is looking for boost his appeal in Central Kenya and snatch some votes from President Uhuru Kenyatta’s basket.

With NARC Kenya Leader Martha Karua already on his side and Peter Kenneth as his running mate, Raila believes he stands a good chance of splitting Uhuru’s Mt. Kenya region – something that he needs so badly if he is to beat him for President in 2017.
“Raila is looking at options and Kenneth is a big consideration because if his links to Central Kenya,” said the source. 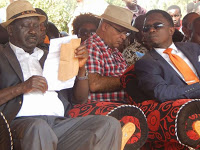 “Kenneth is a neutral candidate and is loved by many of the progressives so is a person to look at for sure,” the source added.