Safaricom net profit 2016. Telecommunications firm Safaricom has announced a 19.6 per cent net profit rise to Sh38.1 billion in the year to March 2016, with much of the growth coming from non-voice services.

Total revenue increased by nearly 20 per cent to Sh195.7 billion.

The Nairobi Securities Exchange-listed firm has proposed a dividend of 76 cents per share, up from 64 cents in the previous year.

Income from other sources such as handsets and construction brought in an extra Sh17.9 billion.

The single largest growth of 42.7 per cent in revenue was in mobile data, whose sales hit Sh21.2 billion.

“Data remains our fastest growing revenue stream and we are focused on growing it further through accelerating smartphone penetration, growing 3G and 4G users, offering relevant content,” said the firm in a press statement. 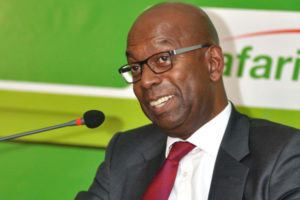 The second largest growth was in M-Pesa services, which expanded by 27.2 per cent to Sh41.5 billion.

The EBITDA (earnings before interest, taxes, depreciation and amortisation) margin – which shows a firm’s ability to earn a profit and generate cash after netting out what is not core to its internal operations – was up to 44.56 per cent compared with 43.58 per cent in the year ending March 2015.