Evangelist Teresia wairimu founded Faith Evangelistic Ministry in 1989 and is currently the director.

She was born in 1957 to Njeri Kinuthia and Kinuthia Kinyanjui.

Evangelist Teresia Wairimu got married in November 1978. She has two children, Robert and Catherine.

It was early morning on 21st July 1985 at 3:00 a.m. when God gave Evangelist Teresia Wairimu a life changing experience. Her room was filled with smoke and a loud voice called her name “Wairimu”. The glory of God filled the room and although she was fearful, she perceived that it was the Lord speaking. She sat up and the Lord spoke to her about her calling, her service to God, and what He was going to do in the church through her ministry.

One week later, at a Sunday service, God manifested His power thro 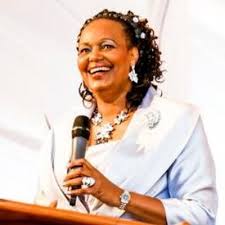 ugh Evangelist Teresia wairimu through the gift of prophecy and word of knowledge.

At the time in our country, we did not have great manifestations of miracles thus there were no mentors to look up to. However when Reverend Bonnke hosted a crusade in June 1988 in Kenya, and Reverend Wairimu witnessed the manifestation of God through Reverend Bonnke, it hit her hard as she identified with that.

After her call, Evangelist Teresia wairimu had ministered in High Schools, Universities, small social gatherings, Bible studies etc, but her dream came to pass on 17th May 1992 in Oslo-Norway when she met Reverend Bonnke and he laid hands on her.

Coming back to Kenya Evangelist Teresia wairimu knew she had received something from God that money could not buy – she had been birthed into ministry on that day and there was an evident explosion in her ministry! Within no time the house fellowship swelled up and was moved to City hall then Kenyatta International Conference Centre (One of the largest auditoriums in the city) and it only took one meeting to move the fellowship to the open Uhuru Park, where Reverend Teresia has faithfully preached without failure, every second Sunday of the month for a consecutive 14 years.

The year 1985 was a horrible year for renowned Kenyan Reverend Teresa Wairimu.

“It was the year that saw my most valued and treasured dream shattered. My heart was broken. Deep down in my heart, I was bleeding,” she says. Tears became a constant part of her makeup.

Eight years before, she had met a man and fallen in love and, “like every little girl … I grew nurturing beautiful wishes and a strong desire for a happy and successful life,” she says in her autobiography, A Cactus in the Desert.

These emerging details contrast sharply with the character of the Reverend Wairimu, who followers at her Faith Evangelistic Ministries fondly call Mum. To them, the evangelist is the epitome of faith and strength.

After Evangelist Teresia wairimu has preached and taught, the spectacle of the “miracle service,” her most enduring trade mark, begins.

She calls out those who would wish to be saved and hundreds will walk from their seats for the spiritual rebirth that can only be experienced rather than explained.

Then  Evangelist Teresia wairimu moves to call out people who are in all manner of difficult situations including the terminally ill.

The sceptics would never believe it. Politicians would envy her following. The critics say it’s all prearranged to hoodwink the gullible. But to the evangelist and the thousands who claim to have received their answers in her meetings, it is evidence that God works through those He chooses.
Yet there was a time Evangelist Teresia wairimu thought all was lost. Her marriage to the “prince” who she describes as a “handsome white man of medium height and build” ended bitterly and she was left hurt and with broken dreams.

Only her faith in God (she had gotten saved in 1977 – the same year she met her husband) kept her going.

Evangelist Teresia wairimu was locked out of her matrimonial home and left with nothing: “No dress to change, no money, no documents in my possession, no name – even his name, which many people knew me by.”

But the most painful loss, Evangelist Teresia wairimu says, was her son Robert, who had been taken away from her custody.

“Had it not been by the grace of God and my solid faith in Him, I would not have survived through the 80s,” she writes in the first chapter of the book.

Unknown to many of those who come seeking her ministry, Evangelist Teresia wairimu has endured the most difficult of circumstances to build the glamorous Christian ministry that boasts properties in Karen and Ngara, state-of-the-art sound equipment, service to destitute children and a following that would be the envy of most of her contemporaries.

In the book, Evangelist Teresia wairimu explores the plight of single mothers through her own lens. “What chance did a divorced woman, a single mother to one and an estranged mother of another one have?” she writes.

Evangelist Teresia wairimu watched her hopes, a happy family, her kindergarten teaching career and dreams of a bright future collapse in a heap before her eyes.

She has endured rumours she candidly acknowledges had been spun and turned until they would produce “believable accounts of malicious untruths”.

The book features Evangelist Teresia wairimu early childhood, the darkest moments and the turnaround that helped her rebuild her life, work at her ministry and raise her daughter – the enduring faith that kept her going until the tearful reunion with her son, once painfully torn away and taken to the custody of his father.