Uduak Amimo is a Kenyan journalist who is poised, professional, sabre-sharp and severe.she’s half Nigerian, half Kenyan. She hosts the current affairs talk show, Cheche, on Citizen TV, which is part of the Royal Media Services. She was one of the moderators of Kenya’s first presidential debates, held during the 2013 general election.

Uduak Amimo begun her primary education at Lavington Primary School in Nairobi before spending three years at Roosevelt Elementary School in Iowa in the United States. She then returned to St George’s Primary school in Nairobi before moving to the Navy Primary and Secondary schools in Nigeria. She completed her secondary education in Kenya at the Bunyore Girls High School.

Uduak Amimo holds a Bachelor of Arts (Honours) in International Relations from the United States International University in Nairobi, Kenya.

Uduak Amimo also holds a Master of Arts in Journalism and Public Policy from the American University in Washington, D.C., which she received after winning a scholarship and teaching assistantship.

Uduak Amimo says she became a journalist to address what she felt was the negative portrayal of Africa, particularly in the international media. Her first job was as an Assistant Producer with Reuters Television in Kenya, where she had interned in her senior year of university. She left Reuters to pursue her MA. After completing her studies, she joined the Voice of America in Washingto 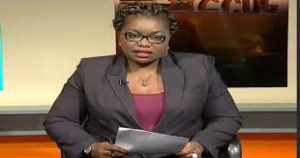 n as a radio and television host, reporter and producer in the English to Africa service.
Uduak Amimo joined the BBC in 2002, as a producer and presenter with the English-language BBC African news and current affairs programmes, Network Africa and Focus on Africa. Amimo presented, produced and edited radio programmes for the African News and Current Affairs section of the BBC World Service before becoming a Senior Producer and Presenter of the BBC African flagship programme, Focus on Africa. In 2006,Uduak Amimo was appointed Senior Editorial Adviser, supporting the Director of the BBC World Service, Nigel Chapman. She moved to Ethiopia in 2009 to become the BBC correspondent in Addis Ababa, covering both the country and the African Union.

She left the BBC and returned to Kenya in 2011. She took up her current position at Royal Media Services in 2012.

Uduak Amimo serves as a trustee on the board of Uraia, a national civic education organisation. She is a 2015 Tutu Fellow and a 2014 GSIH Fellow.

Amimo is a Christian. Her parents are from Kenya and Nigeria.Uduak her Nigerian name means God’s will in her father’s language. Her second name Amimo is a Kenyan name. She is named after her great-grandmother on her mother’s side of the family from western Kenya. She is a first-born.

Her childhood was hard as her parents separated and she was back and forth between them.She grew up with different relatives in Kenya, Nigeria and the US.

Three years ago she would have told you that it was leaving a job at BBC to take a job in Nigeria. Now she doesn’t see it as her biggest failure as such.She sees it as her biggest learning. She learnt a great deal about herselfself there.

She says she had very little tolerance for the little twists and turns in her past relationships. When she was younger she was adamant about getting married and then that changed. She is now in the place where she would like a life partner.

She is currently in her early 40’s