Anne Waiguru was nominated by President Uhuru Kenyatta to the position of a Cabinet Secretary in the Ministry of Devolution and Planning on 25 April 2013.

Ann Waiguru attended Precious Blood Riruta High school then later joined Moi Forces Academy in Nairobi. She graduated from Egerton University with a bachelor’s degree in agricultural economics and also holds a master’s degree in Economic Policy from the University of Nairobi.

Anne Waiguru worked for Transparency International as an intern and research assistant, and then joined the Kenya Leadership Institute.

Anne Waiguru began her career in the public service by providing Technical Assistance to the Public Service Reform Secretariat in what was then the Cabinet Office. She then served as the Head of Governance and the Economic Stimulus Programme at the National Treasury, alternate to the Permanent Secretary/National Treasury in the Public Procurement Oversight Authority and Advisory Board and the Women Enterprise Fund Board.

Anne Waiguru is the current governor of Kirinyaga County.

Ann Waiguru declared her wealth to be worth Sh160 million with liabilities that total to Sh80 million.

Waiguru has three sons Don, Ian and Wabu.  She was married to Tonny Waiguru Njuguna but they  broke up following infidelity issues. 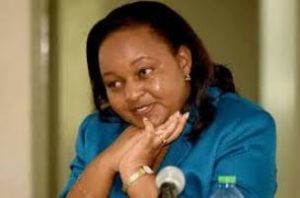 Lawyer Kamotho Waiganjo was married to Lorna Seneiya who is a journalist and a publishing consultant. Together, they had three children.

Lorna Seneiya studies French and Economics at the University of Nairobi and also holds a masters degree in development studies from St. Pauls University.

Kamotho Waiganjo is said to have engaged Kirinyaga governor Anne Waiguru on 16th February 2019. Their relationship however started 10 years ago while they were travelling for a consitutional conference to Mombasa.