BABU OWINO exposed! Apart from drug peddling, here are other EVILS he does at UoN

Embattled SONU Chairman, Babu Owino, has been exposed badly and the evils he does at University of Nairobi brought to light.

Apparently, the controversial SONU leader has been selling drugs to students using his goons. Voctor Ouko alias Stitchez and Gerald Obure Juma, are the two goons who help Owino in peddling drugs.

Paul Owino Ongili alias Babu Owino IS NOT, WAS NOT and would never have been a student at the University of Nairobi.

He was brought in by Professor George Magoha in the year 2011, and registered to take a BSC Degree in Actuarial Science. Magoha prevailed upon the University Senate to CHANGE the Students Organization of Nairobi University (S.O.N.U) Constitution so that Babu could be allowed to run for chairperson of the organization. Babu was given the students organization at a fee, by Magoha. Mbeche, Father Wamugunda and current statue of a VC called Mbithi, were onlookers all along. 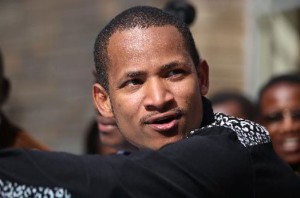 It was reported that Babu Owino would go into Magoha’s office at Central Administration Building, where they would talk for long in dholuo. Babu Owino used money donated by ODM politicians and other proxies including Magoha, to win SONU elections for the first time. He then constituted a group of criminals who served as his “security personnel”, who were led by one Victor Ouko alias Stitchez and Gerald Obure Juma. These goons were at liberty to move around the University doing whatever they pleased. They controlled even members of staff of the University, especially the accommodation’s Students’ Welfare Authority (SWA), where in collaboration with Katuva, the chairperson, and others below him, they were given hostels to rent out. The police should investigate the institution because while students lack accommodation in the University, there are CIVILIANS, CRIMINALS AND OTHER MEMBERS OF THE GENERAL PUBLIC, living in rented rooms in Mamlaka A and B, and Halls 1 and 2.

They all pay rent that is collected by Babu Owino’s goons on his behalf.That Prof Magoha knew this and was complicit, strips him of the honor to serve in the committees the Education CS, Dr. Matiang’i has been appointing him on Education reforms in Kenya.Under Prof Magoha, a criminal, a budding drug peddler and a thug was admitted into the best University in this country and allowed to grow his illegal businesses simply because of tribal affiliations. Babu Owino was awarded a First Class Honors Degree in Actuarial Science, a very challenging course whose class he has never attended.That the University Senate looked the other way and allowed this to happen, is an embarrassment to the education sector in this country.

Paul Ongili has been running illegal businesses in the University of Nairobi with complete knowledge of the top management of the institution, which included drug peddling and distribution for sale to other institutions. At one point, the leader of the famous Babu’s “goons” some of who are not students at the institution, Stitchez Ouko ran a Wines and Spirits bar at one of the Hostels, Hall 11, with the University Management turning a blind eye. This warrants an INVESTIGATION INTO THE UNIVERSITY, DISMISSAL AND PROSECUTION OF ALL MEMBERS OF STAFF INVOLVED.