A Nigerian website, ThisDayLive.Com, has reported how on arrival at Murtala Mohammed International Airport, Dr Owuor was overzealously approached by believers and non-believers for miracles but none has was forthcoming.

At the airport, he was accosted by security men for prayers which he gladly obliged and placed his hand on their heads only to mutter, “God bless you.”

Bizarrely, the man of God declined to “bless” another man who had a rosary until he removed the annoying religious symbol. 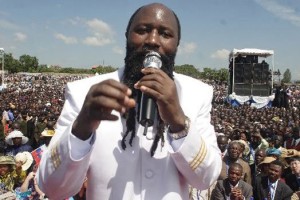 versial Kenyan preacher David Owuor who goes by the title ‘prophet’ crept into Nigeria; paying uncelebrated visits in 2011 and 2012,” the website reports.

The site goes ahead to ruthlessly discredit Dr Owuor’s healing credentials. They write: “Owuor carries the stigma of a fake preacher, even in his home country. And many decent and self-respecting clergy keep their distance from him. Try as they did, the Repent Now Nigeria group was not able to get a buy-in from the organised body of Christians like the Christian Association of Nigeria and Pentecostal Fellowship of Nigeria.”

Dr Owuor might have rubbed many the wrong way when he attacked a well-known televangelist. He’s quoted as saying: “My visit signals an end to ‘gospel of money’ where you have people come from South Africa and all these countries and you sell water and all kinds of things to them. I come to rise up against the gospel of money that is in this city. The gospel of buy your morning water, whichever water, gather people from Southern Africa, carry money to greet the men of God.”

However, in stark contrast to his mammoth prayer meetings in Kenya, Dr Owuor only attracted a handful of people in Lagos. One meeting at a car park attracted a paltry 400 people.

His last meeting was marked by near fatal accident when a floodlight mast fell on a small boy during a rain storm. He was persuaded to get into as rain poured heavily on the small crowd of singing believers. It was a tough tour for the heavily bearded nuclear scientist.