Ben Githae is a father of two daughters but still he has managed his private and music life very well such that he is a role model to many musicians. His album Mabataro gained him significant attention. Driven by the hugely popularity and much demand for his hit single `maya ni mabataro’ getting him serious crossover attention.

Ben Githae is a pioneer in music industry as he has been in this game since 1996 to date. His latest song with Rufftone `maririkane’is a big tune and it’s dedicated to single parents.

Ben Githae attended Muthurumbi Primary School and at that age knew he had a special gift among his peers of memorizing songs. As he remembers once he heard a song, he needed to hear it just once more, to be able to memorize it all, without messing any word. “I think I loved singing more than I do today as then I was a fan today other people are my fans,” Githae told Kikuyu Musicians. At primary school, other children came so he could copy songs lyrics for them. That led him to be nicknamed ‘Karendiu’ (small radio) for his love of anything singing.

Before Ben Githae, sung Kikuyu gospel music for Kenya and the rest of the world, his first audience as a young boy growing up in Nduthi-Ini Village, Gatundu South comprised of coffee pickers. Instead of picking coffee, he would be perched on a coffee tree and singing for those picking. “My passion for music started at an early age,” remembers Ben Githae.

In the era of mid 70s the likes of John Ndichu of ‘Cucu wa Gakunga’ fame and later Mary Wambui, Mary Atieno, Shari Martin and the Kassangas in the 80s were musicians Githae admire 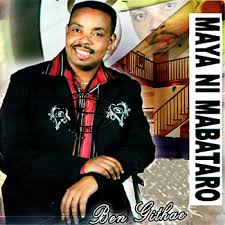 d. In primary school he was the vocalist during school festivals. He also at an early age was involved in Kikuyu children radio programs at KBC hosted by Jemimah Mwaura like Nyihia Hwai. Those programs used to tell stories of Wangombe wa Ihura and Ben Githae would also sing on them.

Afterwards Ben Githae went to Ituro high school where singing took a backseat to acting though he still sang traditional songs. “I was a very good actor and well known in Gatundu,” said Githae. After high school and getting a C+, his grandmother employed him, in her Posho mill as Ben Githae explored his college options.

Working there, did not dim Githae’s musical aspirations in the village he was known as Ben Githae of Carry 1 who loves to sing and works in a Posho Mill. Carry 1 was his grandfather’s nickname. Then in 1994 he got born again and with Jane Muthoni they used to compose songs at the Posho Mill. They also began leading praise and worship in churches around Gatundu and got many invites. “But we were good according to village standards,” recalls Ben Githae laughing.

People advised Ben Githae to tape himself in a cassette then, approach a producer with recorded material. He approached Joseph Kamaru in 1996 with samples and Kamaru felt Githae could sing. As he had no money to record, all production expenses were shouldered by Kamaru. His first album ‘Mwiri Uyu’ was released that year. Githae remembers challenges for a budding musician then, wishing to have music receive radio airplay on KBC was that one had to go through known producers. Then it was the era of producers like Kamaru, Kassangas, Kimani Thomas and Wamaitu Productions.

The desire by Ben Githae to be a musician wasn’t shared by his mom. Among the college options explored for Ben Githae by his aunt was studying to be a teacher. There was also an uncle who could have connected him to study in medical college as a clinical officer. But Githae was adamant he wanted to be in music. This irked her mother, to thinking he was crazy. She would challenge Githae to be in a respectable dignified profession like a teacher or clinical officer not a musician. He persisted on his stand and in 1996 released ‘Mwiri uyu’ produced by Kamaru.

“I didn’t earn much from the album, the terms were awful but all the same I became a musician,” said Ben Githae. The agreement with Kamaru was that per cassette sold he would earn Sh10. However for him to start earning the Sh10 per cassette, Kamaru would first have to sell 2000 cassettes to offset his production expenses. Still he managed to sell the 2000 copies and started receiving the cash.

For his second album he approached Peter Kigia who had better terms. Kigia gave him a down payment and per cassette sold Ben Githae would earn Sh20 since he perceived Ben Githae would sell and had talent. There he released a famed Swahili album “Chunga Ulimi Wako.” In 2002 he decided to self produce and around then Kameme FM had launched so for Ben Githae who was a household name taking his music there was easy. He released ‘Aganu no Marithira’ he would sell it in crusades and churches and also released ‘Ndathima’ album. In 2005 he released ‘Nigukwagira.’ But in 2006 Ben Githae decided to modernize his recording from the River Road style.

The next album was produced at an up market studio in Westlands. It produced a monster of Swahili hit ‘Mulianza na Roho’ that won Ben Githae a Kisima Award. In 2007 he released ‘ona ageria niekuremwo’ album that had hits like ‘niwe unjikite uu Mwathani’ and ‘irathimo Ciakwa.’ The following year he released ‘Timiza Maono’ a Swahili album. In 2010 he released the famed ‘Mabataro Makwa’ album which was a crossover hit among various tribes in Kenya. In 2011 he released ‘kaba kwiyaria’ and ‘witue mundu’ albums the latter a wisdom for living hit. In 2012 he released ‘Tabia Mbaya’ album and his latest in 2013 is ‘Guthii ni Guthii’ with hits like jubilee.

Being such a prolific musician, when composing Ben Githae draws song writing inspiration from situations he observes and the Bible. He also strives to make his songs relatable to everyday living. “Ultimately it’s GOD who gives me revelation,” said Ben Githae. For his cross over hit ‘Mabataro Makwa’ he composed the song while on a plane from US to London seated near an old white grandma from UK. As he assisted her buckle and open a can of soda, the grandma would narrate to Githae of how rich she was, and properties she owned but not in a prideful manner. She told Ben Githae, all she does nowadays is travel around the world to see her children and grandchildren.

As he flew from UK to Nairobi inspiration for ‘Mabataro Makwa’ hit Githae and the song about him desiring to be blessed by GOD abundantly occupied him.

In the song there is a phrase if GOD created the earth and heavens by his Word, fulfilling Githae’s needs is no big deal to him. When he landed in Nairobi he polished the song that subsequently became a de facto spiritual anthem to every Kenyan, with needs waiting on GOD to fulfill them.

For Ben Githae, composing comes chronologically like a story with melodies in tow. But there are songs that are problematic that he at times has to rest when composing and resume later with a fresh outlook. “ But others take 20 minutes,” he said. He attributes the longevity of his songs to GOD’s favor and also writing messages that relate to people and are Biblical. He points to a song like ‘Mulianza na Roho’ to illustrate how that Biblical message he based the song on, as still relevant today.

Regardless of the fame he has received, Ben Githae regards humility as key to exaltation. “Don’t let the celebrity mentality get into your head you will become prideful,” he said. “Let your songs go up in fame and leave you down here as Ben Githae,” he adds. According to him songs are the hit not the musicians.

Though piracy he admits has hit him, he says advances in technology have opened other avenues for earning through music like Safaricom’s Skiza tunes and ringtones. “Concerts and shows I perform in can’t be pirated and I can’t complain, GOD has blessed me,” Ben Githae adds.

To date Ben Githae cites 3 shows as his most memorable performances. The first was in Nyayo Stadium hosted by Kameme FM where on taking the stage, people left the stands and run to the pitch to sing. The other was in Nyeri during the launch of Kikuyu Bible where Kenya’s former president Mwai Kibaki was attending.

As Ben Githae recalls, the former president even stood to sing and sway to the music which is uncharacteristic of him. The last event was by Safaricom in Meru, where he was a supposed to be a curtain raiser to the likes of Jaguar but he instead eclipsed them. “I went to that stage and the crowd atmosphere changed it gave me lots of joy,” Ben Githae remembers.

Ben Githae advice to upcoming musicians wishing to make it into the industry is to have their music professionally produced and aggressively push it to radio and TV. “Still it’s all about GOD’s favor and timing when it’s your time HE will make a way,” says Githae. Besides singing, Githae plays drums and by his humorous admission, is an amateur keyboard player who plays at events when no one else is available to play. He also prefers to sing live if instrumentalists are available than with playback.