Besigye ‘sworn in’ as Uganda’s president

Besigye ‘sworn in’ as Uganda’s president. Uganda’s opposition leader Kiiza Besigye was on Wednesday morning “sworn in” as the country’s parallel president.

The “swearing in” ceremony was conducted at a public gathering and witnessed by hundreds of cheering supporters including Forum of Democratic Change (FDC) leaders, according to a four-minute video shared on social media later in the day.

The clip shows a smartly dressed Besigye, clad in a fitting black suit and blue tie, arriving for the function amid cheers and ululations from his supporters, before taking the “oath of office” presided over by someone dressed in the court dress – a robe and a wig.

“I Kiiza Besigye Kifefe swear in the name of the Almighty God to remain faithful to the Republic of Uganda and that I shall preserve, protect and defend the constitution of Uganda. So help me God,” Besigye, swore while holding the Bible.

Later on, the 60-year-old opposition chief addressed his supporters saying: “What is happening today is not an ordinary swearing in ceremony. This is because our country is in a unique and unenviable place of not running according to the constitution of the republic of Uganda.”

Besigye has disputed the results of the 2016 general elections in which official results by the electoral commission indicate he lost to incumbent President Yoweri Museveni by about 1.5 million votes. 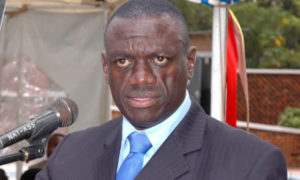 He claims to have been rigged out during the polls by a combination of intimidation by state agents, ballot stuffing, bribery and inaccurate vote tallying.

Interestingly, Besigye’s “oath of office” was conducted barely 24 hours before Museveni does the same in an elaborate function that is slated for the Kololo Independence grounds in Kampala on Thursday.

Several Heads of State including Robert Mugabe, John Pombe Maghufuli and Uhuru Kenyatta are expected to grace the event.