BETTY KYALO obsessed after divorcing OKARI. Late last year, KTN’s Betty Kyallo walked down the aisle with NTV investigative reporter, Dennis Okari, in a lavish wedding that caused a fuss on the blogosphere.

After exchanging vows, they flew to some of the world’s best tourists destinations for their honeymoon but their marriage went to the dogs after Okari realized that Betty was cheating on him with Mombasa Governor, Hassan Joho.

The wealthy Governor has been bankrolling Betty Kyallo and spoiling her with expensive gifts among them a Toyota Prado VX and a lavish apartment in Kilimani.

According to Betty’s close friends who are worried about her recent sudden change of behaviour, she is planning to get married secretly to Joho as a second wife before the year ends.
The sultry talented anchor has been praising Joho’s bedroom prowess to her close friends and that’s why she is ready to be married as a second wife.

Last weekend, she flew to the Coast to enjoy a vacation with the wealthy Governor who has been visiting her frequently at her house in Kilimani. 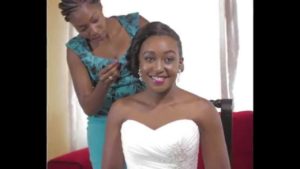 Betty has already removed the wedding ring, a clear indication that she is done with Okari.