Former President Mwai KIBAKI speaks for the first time concerning Lucy Kibaki’s death, who died last week . Former Kenyan first lady Lucy Kibaki died Tuesday in London, where she was undergoing treatment after battling illness for a month, according to President Uhuru Kenyatta, who did not provide specifics. She died at the age of 75.

While addressing over 40 envoys and Government officials who visited him at his Muthaiga home in Nairobi to comfort him at this difficult moment, Kibaki refused to accept that Lucy was dead.

The visibly distraught ex-President maintained that the former First Lady was not dead, but just moved from this earth to heaven, and exuded confidence that he will meet her again.

Nonetheless, Kibaki thanked Kenyans for the support that they gave him and his family since Lucy fell ill to her death last week.
He also appealed for prayers from Kenyans and also begged those who will manage to attend the funeral to do so, saying such support is what keeps him and his family going, especially now that Lucy is no more. 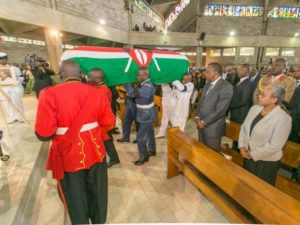 “Thank you for turning up in large numbers and praying for us. I am happy and humbled… Such support is what keeps us strong and going,” said Kibaki.