Popular reporter, Evelyn Wambui, who exposed how Mugo wa Wairimu was messing up with female patients in his dingy clinic, is among leading journalists who have been sacked by Citizen TV in the recent massive lay-off.

According to snoops, Evelyn Wambui was sacked because of her sloppiness and pride. While her fellow journalists reported to work as early as 7 AM, Evelyn Wambui would report to work at around 12 PM and absconded duties on weekends without permission.

Before she was sacked, she was warned by her bosses to keep time and avoid laxity but she gave them a deaf ear.

Apparently, Evelyn never thought that she can be sacked because her feature stories like when she covered Ruto’s life, Nancy Baraza’s day, did features on NTSA’s war on DUI, they were doing well and this made her think that she is an indispensable asset of Royal Media Services.

Sources intimate that the popular reporter nearly collapsed after receiving the dismissal letter. 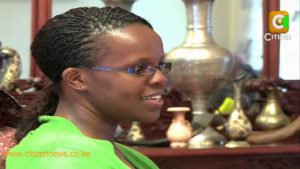 Other top journalists who have been shown the door include Kendagor Obadiah, Pheona Kenga and Patrick Injendi.