Jaguar Kenya. Charles Njagua Kanyi popularly known as Jaguar is a Kenyan musician well known for his hit song Kigeugeu which has won the most awards.

Jaguar was born in a family of three siblings and at the age of Eleven he lost his Mother. He grew up in Nairobi where after loosing his mother he was forced to work in informal employment working several odd jobs to earn a living.

His first recording was done in 2004 and thereafter he joined East Africa’s music Power house Ogopa Deejays in 2005 where he recorded and released several singles among them his most popular hit single “kigeugeu.”

Jaguar owns a fleet of personal luxury cars besides his music business, and is also known to have investments in real estate as well as in transport and Aviation Industry.

Photos that were leaked online showed that Jaguar had a private wedding in south Africa where they were seen exchanging vows in church before a man of God.

According to a post that Jaguar shared on social media, he is a father of two dauhgters. 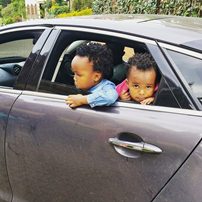