When NTV’s Managing Editor, Linus Kaikai, was involved in a terrible road accident in 2012 as he was heading back to Nairobi from a fund raiser with his colleagues at Nation Media Group, he was baldy embarrassed after 9 of his clandestine lovers visited him in hospital to offer him emotional support.

At that time, Linus Kaikai was engaged to popular gospel songstress, Emmy Kosgey, and their relationship was headed for marriage but after she realized that Linus Kaikai was a notorious womanizer, they had a bitter break-up.
To make matters worse, some of the clandestine lovers who visited Linus Kaikai in hospital with children who resembled him were his colleagues at NTV and this left Emmy in shock.

After realizing that Linus Kaikai was a randy man who unleashes his propeller to anything in a skirt, Emmy decided to cancel their engagement and moved on but Linus didn’t take this lightly.

He started selling stories to gossip writers like Steve Muendo with the intention of spoiling the engagement of Emmy Kosgey to wealthy Nigerian preacher, Anslem Madubuko.

Exchanges between Kaikai and Emmy were so nasty that at some point, it forced a senior politician who was a mutual friend to the two to intervene. 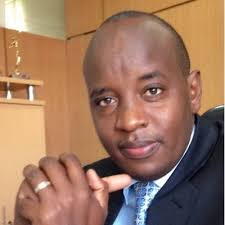 Sources intimate that Emmy and Kaikai never see each other eye to eye although they have already moved on but even after getting married, Kaikai is still a notorious womanizer who has tasted some of those hot anchors you see on NTV.