Louis Otieno  infected Careen with a disease. Former KTN anchor, Louis Otieno, who is currently seriously ill, is said to have infected his late girlfriend, Careen Chepchumba, with a deadly disease before she died under controversial circumstances.

Before Careen started dating Louis, she was a young lady with a promising career. She was an engineer with Kenyan Power and Lighting Company (KPLC).

Louis ended up destroying Careen’s life and career after she started going out with him.

Her father, Mr Hosea Kili, was the first to take the witness stand where he sensationally claimed his daughter had borrowed heavily from friends and family to finance the flashy lifestyle of the former television personality Louis Otieno.

“Trouble with Careen started when Louis Otieno moved to a house next to our’s in Rose Park Apartments, Kilimani. My wife was the first to notice that Careen was having a relationship with Louis Otieno,” he said.

Careen would steal money to sustain Louis Otieno’s extravagant lifestyle. At one time, she stole a whooping Ksh 600,000 from her father’s briefcase and gave Ksh 400,000 to Louis

“I started receiving shocking information from my friends and family members that she borrowed money from them. She had also used Sh1.2 million meant for a business venture to finance Mr Otieno’s lifestyle.

In total, she had borrowed Sh3,000,000 from her father’s friends and close family members. He also claimed his daughter was found dead a day after she had revealing to the family how Mr Otieno had been blackmailing her.

She also traded her VW for a Ranger Rover that she gave to Louis.

After she broke up with the former anchor and moved back to her parent’s home, he started threatening her with death. 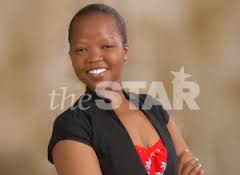 Rumour also has it that Louis planned Careen’s murder after she revealed to her parents that he had infected her with a dangerous disease.

Louis was supposed to testify in the murder case but his lawyer said that he was too sick to appear in court in person.