Reports indicate that Ms Masika’s red new car was rammed from behind at around midnight by a truck on Thika Superhighway.

They were on their way to an award ceremony in Thika in honour the “Wako Mwema” hitmaker.

“We felt there was no need for us to go to the ceremony too early and so we left Nairobi around 2am expecting to be there within 30 minutes. Mercy was in the co-driver’s seat and she had dozed off as I drove at a constant speed of 100kph. Suddenly, our car was hit from behind,” said Mr Muguro.

The couple emerged unhurt save for the few minor injuries but both vehicles were extensively damaged.

An ambulance on patrol took them to the Aga Khan Hospital, where they were all given a clean bill.

“The other driver, who was alone, was also unhurt. The airbags protected him but his car was badly damaged,” said Mr Muguro.

Incidentally, the other driver, Mr Dominic Kinyanjui, is also a gospel singer who specialises in Kikuyu songs. He was on his way home.

Reports of the crash flooded social media with some claiming she was fighting for her life. However, her husband said she was fine, only that she was a little shaken.

Further reports suggest the accident might have been partly caused by poor visibility due to the heavy rain at the time of the accident. 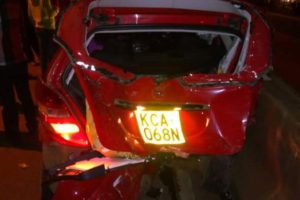 The award winning singer took to social media on Sunday to allay fears that was seriously injured in the accident.

“I take this time to say am completely out of danger and without even a scratch from the accident. I serve a living God,” Ms Masika wrote on Twitter.

Earlier, reports circulating on social media suggested that Ms Masika is “fighting for her life” at the Aga Khan hospital in Nairobi. 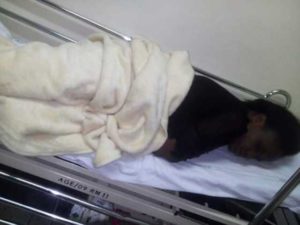 This prompted thousands of fans to throng social media to wish her a quick recover.