MUTAHI NGUNYI reveals what RAILA Odinga is set to do in Germany in 2017. Renowned political analyst, Mutahi Ngunyi, has said that CORD leader, Raila Odinga, cannot win the Presidency even if he vies for it 100 times.

Appearing on Jeff Koinange Live (JKL) on KTN on Thursday night, Mutahi Ngunyi said that Raila Odinga will not win any presidential election and the only way he will get into Government was to push for a coalition.

Mutahi Ngunyi said that Raila Odinga is planning to set a parallel vote tallying centre in Germany in 2017 so that he can declare himself President and thereby precipitate a crisis.

He said Raila Odinga will not believe on the results by the Independent Electoral and Boundaries Commission (IEBC) and that is why he will set up his own vote tallying centre in Germany. 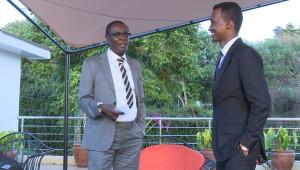 “One, you must set up a tallying centre in Germany as he told us he would do. So that when the results are out, he declares that actually he is the one who won. The idea is for him to declare himself President and as a result, precipitate a crisis” Mutahi Ngunyi  told Jeff Koinange.

Mutahi Ngunyi who is famous for his Tyranny of Numbers said since the country will be in a crisis, Western countries will force the Jubilee Government to share power with the opposition and Raila Odinga will automatically become a Prime Minister.