MILLIE ODHIAMBO didn’t just throw her TH0NG in Parliament, she STRIPPED for UHURU.

Flamboyant Nairobi Senator, Mike Mbuvi Sonko, has blasted Mbita Member of Parliament, Millie Odhiambo, for exposing her ‘dirty’ nakedness to the public on Thursday when she and other ODM legislators heckled and booed President Uhuru Kenyatta during the State of the Nation address.

Speaking yesterday, Sonko revealed that Millie  did not just throw her thong in Parliament in the presence of President Kenyatta, she literally stripped for him and ended up ashaming herself.

The Nairobi Senator noted that she saw Millie Odhiambo lift her leg and pull up her dress towards the direction of the President in a suggestive way.

Sonko accused Millie of not having ‘circumcised’ her brain just like her male counterparts from Nyanza who are not circumcised down there. 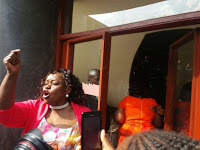 Millie and others from ODM were thrown out of Parliament on Thursday for heckling Uhuru and blowing whistles.