NASA principal Moses Wetang’ula to defend his seat as Bungoma senator on the Ford Kenya ticket.

Speaking at a press conference in Bungoma town yesterday, the party officials led by Bungoma county secretary Peter Wakhuleka, said they had convinced the party leader Moses Wetang’ula to defend his seat as there was no replacement who could fit in his shoes.

“It is a sealed deal and we are going to present his name to the IEBC as an unopposed candidate,” he said.

Wakhuleka, who was with Ford Kenya aspirants from Bungoma and Trans Nzoia counties, said Wetang’ula will relinquish his seat in the event NASA forms government and take up his position as deputy prime minister as proposed.

Moses Wetang’ula had been lined up for the proposed seat of deputy prime minister in the power sharing deal that has been deposited at the Registrar of Political Parties.

There has been speculation about what post he would run for, with political pundits arguing that he was destined to either run for Bungoma senator or governor.

Ford Kenya had technically reserved the Bungoma senator for him, fielding no any other candidate in theprimaries.

Political analyst Isaac Wanjekeche said the declaration could complicate matters for other aspirants who had declared interest in the seat thinking he would not run.

“It is going to be an easy ride for Wetang’ula and this will send the political wannabes, who had declared the quest to succeed him, to political limbo,” he said.

Those who have declared interest in the post include journalist David Makali (ANC), Bonny Nyongesa (ODM) and educationist Juma Mukhwana (Jubilee).

Wanjekeche said the decision to run for senator indicates that Wetang’ula is not sure of a NASA win and fears being in political oblivion.

“Wetang’ula doesn’t want to find himself in the political situation Raila and Kalonzo have found themselves at in the past, hence the need for him to devise a fallback strategy in an event of a NASA loss in August,” he added. 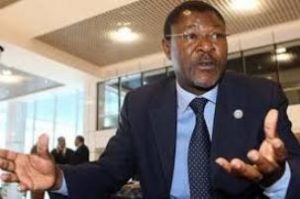