Kiambu Governor, William Kabogo, is rewarding KamemeFM presenter Njogu Wa Njoroge with a palatial home which is still underconstruction for helping him air propaganda through his popular morning show.

Although Kabogo is among the worst performing Governors who have looted public funds and still walking free, Njogu  has been praising him in his morning show and lying to his listeners how Kabogo has transformed Kiambu County.

Njogu wa Njoroge is paid good money to do PR work for Kabogo and taint the image of his opponents.

During his tribal thanksgiving ceremony in Kasarani where politicians like Kuria and Waititu incited members of Kikuyu community to rise up against other communities, Kabogo gave Njogu wa Njoroge his hummer to move around the stadium greeting his listeners. 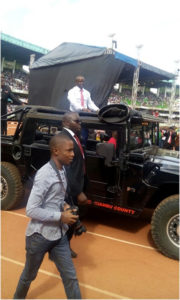 Sources said that Kabogo is building Njogu wa Njoroge a palatial home in the outskirts of Nairobi to reward him for spreading propaganda on his be-half through the popular morning show.

He is on the payroll of hate mongers and tribal leaders in the Jubilee Government who use him to incite their followers.

The Toyota VX worth Ksh 10 Million which he drives is a gift from the Jubilee Government for using his show to defend “Uthamaki”.