Pastor Edisai Mensah. A local preacher in Benoni, South Africa, has come under criticism after he ordered his congregation to strip naked and engage in self-pleasure.

Pastor Edisai Mensah told church member that self-pleasure would earn them eternal life and free them from diseases.

According to news website thesountherndaily.co.za, congregants who participated in the act were told they “would be rewarded with eternal life free of sickness”.

A five-minute video footage of the church service captures the moment that Pastor Mensah told the congregants that “God had sent his angels to oversee the act”.

He also said the act would make the church’s floor as sacred as heaven.

“Start now, the angels are watching here to see who is doing and who is not doing.”

In the video, congregants can be heard in the background moaning.

Religious leaders in South Africa have asked authorities to take action against Pastor Mensah for misleading Christians in the town of Benoni. 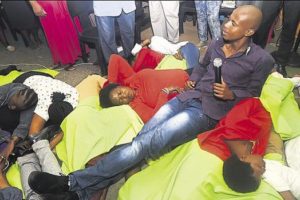 His church members, however, came to his defence, saying that their Pastor does what he is instructed by God, and that people must not question God.