NYAMBANE in trouble for messing with KIDERO’s mpango wa kando

Walter Mongar’e aka Nyambane. Nairobi Governor, Dr Evans Kidero, reportedly suspended his Communications Manager, Walter Mongar’e, after he waylaid a young lady who works at the Governor’s office and is thought to be his side kick.

According to an impeccable source at City Hall, Mong’are who is known is social circles as Nyambane, dishevelled the lady who happened to be Kidero’s clandestine lover.

The lady is said to have reported Nyambane to Kidero and that is why he was suspended with immediate effect.

Before he was suspended, Mong’are was summoned by Kidero and told to explain why he ‘touched’ his queen.

Kidero is said to have hired the lady as a Communication Expert in exchange for s3x while well aware that Mong’are doesn’t possess the same qualifications as her.
When she joined City Hall, Mong’are was asked to furnish the Council’s Human Capital department with his qualifications which he did not do.

Kidero overlooked this but when Mong’are accosted his lady, he found the perfect excuse to suspend him.

The Governor, who is one of the most corrupt Governors in Kenya, is married to a beautiful wife, Susan Mboya. 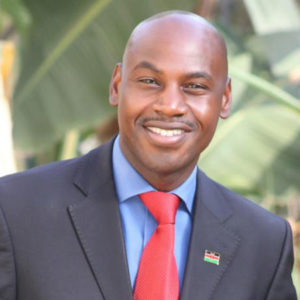