Herman Gakobo Kago popularly known as Professor Hamo, is one of the most talented comedians on Churchill Show that airs on NTV every sunday.

Prof Hamo was born and brought up in Nakuru where he grew up in the military base in Lanet as his late father was in the army.

Professor Hamo is the fifth born in a family of eight.

Prof Hamo attended Kenyatta and Nakuru East primary schools. He then went to Nakuru Day for his high school and later went to Kisumu Polytechnic where he was studying electrical engineering but dropped half way. 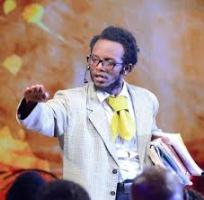 Professor Hamo started going to Nakuru theatre and joined a band called Tamasha as a vocalist but he was unhappy as it was not paying well. He later started selling mandazi so as to survive but he still sang in the band.

Prof Hamo learnt that Churchill show auditions on Tuesdays in Nairobi and so he travelled to Nairobi to try his luck but the judges chased him out of the stage. Before his breakthrough on churchill show, he auditioned six times. During ‘Churchill on the Road Show’ in his hometown Nakuru he tried his luck and was given a chance.