Paul Kimani Njoroge popularly known as MCA Tricky rose to fame after joining the list of Churchill show comedians. His talent took him from the streets to the TV screen.

MCA Tricky is 23 years old and is the last born in a family of three.

MCA Tricky is a school dropout from Ikungu Primary School in Makindu, Mombasa.

Life on the Streets

For MCA Tricky, street life started when he was young at the age of 14-15 yrs. After dropping out of school he came to Nairobi without telling anyone and ended up in Saika Estate along Kangundo Road where he got mixed up with the wrong crowd.

‘Initially I was just hustling while being hosted by someone but as things got worse I ended up in abandoned buildings and I hit rock bottom. That’s when I started sniffing glue as a pick-me-up. Glue can make you feel full for five days, even if you have not eaten anything. Sniffing glue makes you feel like you are on the same level as everyone else, but it’s a bad addiction’. Narrated MCA Tricky.

Being a comedian came as a surprise to MCA Tricky as the first time he went for Churchill Show audition, he was actually escorting a friend. When he got to Carnivore, they all had to register, so he did it as a formality because he thought they were giving free lunch.

He was called to do something and did only two or three jokes where the judges liked his delivery and gave him a chance. His first show on churchill show aired on March 10, 2016. 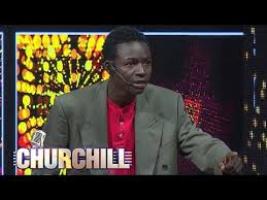 In his first few episodes he was just telling jokes but he later realized his strength was in story telling, so he took that route.