Sheila Mwanyigha first appeared in Kenyan Music in 1997 and she won her first kisima award in 2006.

Sheila Mwanyigha became a radio presenter after she had an interview with Caroline Mutoko who referred her to a radio station that was just about to be set-up, where she was invited for an interview and offered a job.

Sheila Manyigha lost her job at NTV late last year(2015) after dedicating more than a whole decade to the Kimathi Street-based media corporation.

Word on the street is that Sheila Mwanyigha and other Nation F.M presenters were sent packing since Nation Media could no longer sustain them due to financial constraints.

Losing her job was a blessing in disguise as She dedicated her free time to something she has always wanted to do, to create a magazine.

Together with her team, Sheila has been able to bring ‘Rembesha’ Magazine to life. Rembesha is Kenya’s first digital and print magazine, which showcases the latest in hair and beauty. 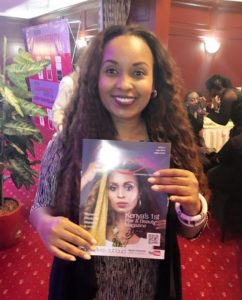 Venture out and create the dreams you have! I’ve always wanted to create a magazine, and here I am with Rembesha Kenya a digital and print, hair and beauty magazine. We won an award for best magazine at this year’s Kenya Hair And Beauty Contest and I am so grateful and thankful to Team Rembesha, the salons and product providers who are working with us!

Prezzo dated the dazzling lady when she was still known as ‘Nikki’, the sultry singer who was making headlines everywhere with her sweet voice.

Unfortunately Prezzo ditched Sheila Mwanyigha when he landed his eyes on another girl.