Elizabeth Wanjiru is in her 70’s.

Shosh began acting while still a young girl at Alliance Girls High School. She has a strong stage presence and her talent as an actress is well pronounced. 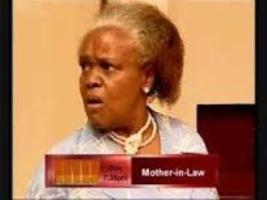 Shosh is a University of Nairobi graduate with a Bachelors of Arts degree and also holds a post graduate diploma.

Elizabeth Wanjiru  separated from her Ugandan husband in the 80’s. The husband abandoned her in 1981 after 13 years of marriage. Her husband Shem Bageine, is the Ugandan Minister of State in East African Affairs.

Shem Bageine went back to Uganda in 1987 to build his career after his Kenyan citizenship was revoked by the government where he rose through the ranks from MP to assistant minister then to his current position as a minister.