Linet Masiro Munyali aka Size 8, is a Kenyan singer, songwriter and actress. She started out as a secular artist and she is popularly known for her singles “Shamba Boy” and “Moto”. In April 2013, she confirmed that she was born again by releasing gospel single “Mateke”.

Size 8 was raised in Maringo Estate in Nairobi. She is the sixth born of six other siblings. Her parents are Samuel Kirui Munyali, a Ugandan and the late Esther Njeri, a Kenyan.

Size 8 attended Dr.Livingstone Primary School where she topped in her class in the KCPE. In her high school, she got a scholarship in State House Girls.

Munyali was discovered by Clemo, a Kenyan producer and co-founder of Calif Records, when she auditioned locally and later signed on the Record label. 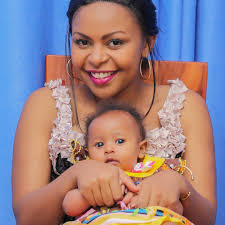 Size 8 is married to Samwel Muraya, aka DJ Mo, and together they have a daughter Ladasha Belle Muraya and a son Muraya Junior.

The two held a traditional wedding ceremony before officiating it through a church union all of which was done privately.

Problems with her pregnancy

She narrated how she almost lost her baby during the pregnancy but because of her faith in God, she was able to overcome the devil.

“My baby @ladashabelle is a miracle from God a sign of his power in my life. My pregnancy was full of problems I almost lost her several times the enemy the devil fought her so much. But God fought back for her. This is my testimony of God’s faithfulness in my life. Don’t be afraid in any and every situation God is powerful to give u victory. Hallelujah to our God……..”