Suzanna Owiyo is a Kenyan musician whose Music is a fusion of the traditional western Kenyan Music with traditional African instruments, and contemporary rhythms. Suzanna Owiyo has gained audience world over due to her unique and magical voice.

Suzzana Owiyo was born on May 10th, 1975 in Kasaye village near the lakeside city of Kisumu.

Suzanna Owiyo was introduced to music at a tender age by her grandfather,  and this enabled her to win many trophies for her school during music festivals. she performed as a background vocalist before starting her solo career.

After producing ‘Kisumu 100’, the hit song propelled Suzanna Owiyo to immediate success, which led to numerous concerts both in Kenya and abroad. she thereafter received a nomination in the Kora Music Awards 2002 in the “Most Promising Female Artist” category and won Kisima Award for the same category in 2003. 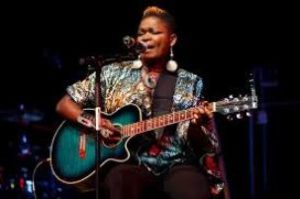 Suzanna Owiyo has been happily married to Mr Eric Ounga Oguda as a second wife for a period of sixteen years now and together they have a 14 year old daughter. Eric Ounga owns the Ounga Commercial Agencies which deals in real estate.