UHURU almost shed tears while in Kisii County – Look at what happened.

In his visit, thousands of Kisii residents welcomed the head of State as they lined by the roadside to have a glimpse of the father of the nation.

Uhuru, who was almost shedding tears of joy over the warm reception, urged residents to focus on development politics and refrain from listening to leaders who want to divide Kenyans.

“Let leaders who want Kenyans to fight send their own children to fight,” Uhuru said.

Residents who were chanting ‘Uhuru Tena’ apologised to him for supporting the opposition in 2013 and assured him of their support in 2017.

Uhuru visited Kenyenya, Mogonga and Ogembo where he met a sea of humanity that was happy to receive the Head of State.

These are a few photos from Uhuru’s rallies in Kisii County. 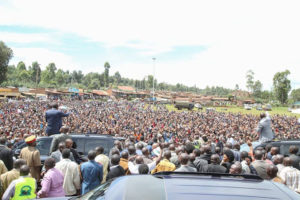 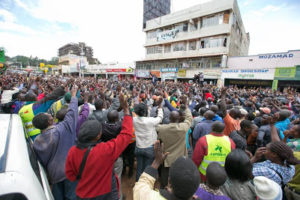