REVEALED: What killed LUCY KIBAKI and what she went through until her last minute

What killed LUCY KIBAKI . After hiding what was ailing former First Lady Lucy Kibaki from the public for over 5 years that led to her death yesterday, details of what exactly killed her have emerged.

A source close to the former First Family, who could not be mentioned out of respect for former President Mwai Kibaki and the late Lucy, revealed that the ex- First Lady died from a number of complications ranging from old age and acute arthritis.

The source discounted allegations that Lucy may have been suffering from diabetes and hypertension.

“Madam had complications to do with old age but diabetes and hypertension were not among them. Acute arthritis was her main problem,” said the source.

The source further revealed that even though Lucy Kibaki was in excruciating pain until her death, she remained cheerful with a clear head to the end.
For the last five years, Lucy Kibaki was in seclusion and could not walk by herself. She moved around in a wheelchair. 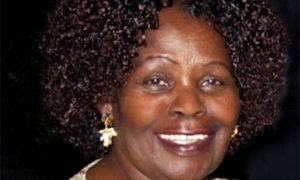 The last time she was seen in public was in 2010 during the promulgation of the new Constitution until yesterday when she died.