5 things you should know about WAMBUI, the young lady BOB COLLYMORE has married.

Wambui Kamiru was married to Joseph Kinyua in 2007 and had 3 children together.They were a happy family until Bob Collymore came to town.

Many have blamed Bob Collymore for the couple’s divorce. So, this is her second marriage.

How she met Bob Collymore

Wambui  met Bob Collymore in a fundraiser for survivors of the Loreto Convent Msongari School bus crash that occurred in July 2011, thereafter Wambui Kamiru started going out with Collymore while still living with her husband and Bob Collymore even used to drop her at her marital home after their dates. After a legal divorce from her husband, Wambui Kamiru became ‘officially’ Bob’s girlfriend and the rest is history.

She is an artist

Ms Wambui Kamiru is an artist and founder of The Art Spac – an Independent visual art space that comprises of a commercial gallery and alternative show spaces.

She’s an alumnus of Oxford University

Wambui Kamiru is not your average Kirinyaga girl, she has studied in some of the best schools in the world, she attended the Loreto Msongari, University of Maryland Baltimore County for a Bachelor’s degree then did her Masters at the University of Oxford.

She has three kids already

She has three children from her former marriage with two of the kids being twins! 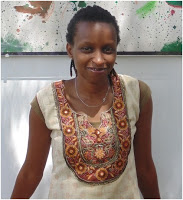 Here are PHOTOs from BOB COLLYMORE’s wedding to his lover, WAMBUI KAMIRU