BETTY KYALLO does the unexpected and leaves Kenyans shocked, including OKARI, see EVIDENCE.

KTN’s anchor, Betty Kyallo, has dropped her husband’s name, six months after their lavish wedding that was the talk of the town.

Apparently, word has been going round that their marriage had hit rock bottom due to infidelity and other irreconcilable differences.

It’s alleged that Betty was not happy with Okari for keeping close ties with his baby mama and supporting her financially.

Although, the two have not come out to clear the air on these rumours, Betty Kyalo 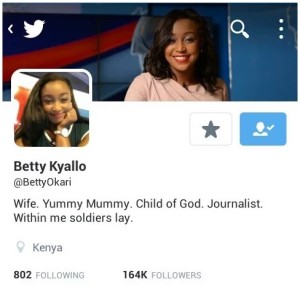 has officially confirmed that all is not well after dropping her husband’s name.

Betty Kyalo has also deleted wedding photos that she had splashed all over her instagram page.

Revealing why she decided to drop her husband’s name, the sultry talented anchor said; “It is time I began all over again, it is tough but it needs to be done, it makes me happy now, I’m back to the basics,”