William Ruto’s health. Kenyans on social media are furious and angry with blogger, Robert Alai, after he said on Thursday morning that Deputy President William Ruto has been admitted at Nairobi Hospital’s High Dependency Unit (HDU) after he collapsed at his home on Wednesday evening.

Though it later emerged that it may have been someone else and not Ruto, Robert maintained that Ruto was rushed to Nairobi Hospital on Wednesday evening for a routine check up and he was later discharged from hospital.

However some Kenyans on social media did not take Alai’s words lightly and they started hurling insults at him for peddling such a grave rumour with some individuals going as a far as threatening his life.

Here are some comments from his wall.

“In 90s many activists prayed, some even fasted wishing president Mo1 would die, its over 25yrs and M01 is still alive majority of those activist died before millineum.Alai’s of this world are at it again this time praying for William Ruto to die, don’t be surprised to see them dying before their dreams comes true,” Henry Rop.

Robert Alai appears to have retracted and apologized for his tweets that were critical on deputy President William Ruto’s health.

Mr Alai had camped on Twitter for the better part of Thursday morning with claims on Mr Ruto’s alleged ill-health.

However, his posts were discredited after Mr Ruto appeared in Mandera mid-morning alongside President Uhuru Kenyatta to commence a 3-day development tour of the northern Kenya. 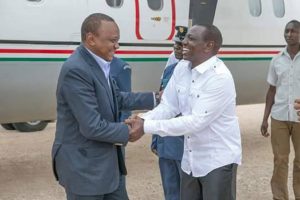 Mr Ruto’s appearance touched off a barrage of tweets and messages to Mr Alai, with some people accusing the blogger of wishing the deputy President bad luck.

After a brief hiatus from social media for a few hours, Mr Alai came back with what reads more like a retraction than an apology.

On his Facebook, he wrote: “I guess many of us were fooled. Some deleted their tweets so fast while I thought that it was the truth. All the over 800 threats and messages are not necessary. Some sound like war cry. But I am happy that the DP is fine. I hope that you are satisfied. Thanks.”

On Twitter, the blogger tried to absolve himself from blame in an exchange with lawyer Ahmednassir Abdullahi and Elgeyo Marakwet Senator Kipchumba Murkomen.

“I don’t wish him evil or death. I was given something I thought was credible info,” read one of his tweets.

“But I told you that you people don’t verify your info…and long term that destroys your credibility,” Mr Ahmenassir responded.