Is Raila Odinga the one who collapsed in his Karen house

Raila Odinga collapsed. Former Prime Minister Raila Odinga has surreptitiously jetted out of the country to South Africa amid rumours that a VVIP may have collapsed in his house in Karen and was rushed to Nairobi Hospital.

In a statement to Kenyans from Raila Odinga’s Spokesman, Dennis Onyango, the former PM, who is revered as an African icon, left the country this morning for South Africa where he will attend a conference on The Future of African Cities hosted by the Brenthurst Foundation, beginning this tomorrow Friday, 20th May, 2016.

The conference will focus on policy options for making cities liveable and economically more viable.

The summit will particularly focus on experience of practioners from South Africa, Morocco, United Kingdom, Nigeria and Kenya.

Onyango also confirmed that Raila Odinga will be back in the country by the weekend to lead Monday’s demos against the Independent Electoral and Boundaries Commission (IEBC).
Surprisingly, Raila’s surprise trip to South Africa comes amid early morning rumours by the Opposition about the alleged ill health of Deputy President William Ruto, where CORD propagandists claimed that he collapsed at his Karen home and was rushed to hospital.

Mr Robert Alai had camped on Twitter for the better part of Thursday morning with claims on Mr Ruto’s alleged ill-health.

However, his posts were discredited after Mr Ruto appeared in Mandera mid-morning alongside President Uhuru Kenyatta to commence a 3-day development tour of the northern Kenya. 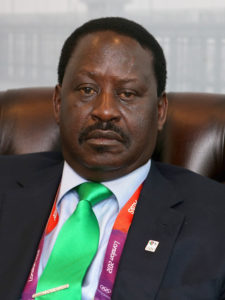 One wonders if the former PM is the one who is actually going to hospital in South Africa under the guise of attending an international conference because as we speak, the DP is as fit as fiddle and is going about his business as usual.

CORD had claimed that Jacob Juma’s blood had started to haunt Ruto after allegedly killing him in cold blood, but as it appears the former PM could be the one being haunted.