Achieng Abura was born in Eldoret and was a single mother to one son. She held an MSc. degree in Philosophy and Environmental studies.  She joined Kenya High School’s Life Ministry and sang Gospel Music while a student of a Bsc (Chemistry) degree at the Virginia Commonwealth University, USA, where she sang with the Monroe Sisters, in 1990. Her debut gospel album ‘I believe’ became a household song. In 1993, when Abura’s mother passed away, she recorded and dedicated an album to her titled ‘Way Over Yonder’ she then recorded her third album ‘Sulwe’, with Ted Josiah of Blu Zebra. 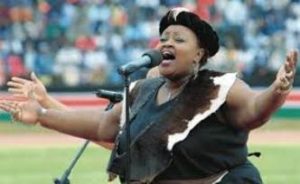 Achieng Abura won the Kora Award in 2004 for Best East African Female artist. She was part of the Divas of The Nile supergroup that featured four Kenyan female musicians which included Suzzana Owiyo, Mercy Myra and Princess Jully.

Achieng Abura died on thursday 20th October 2016 after an illness at Kenyatta National Hospital where she had been admitted at the private wing on 13th October.