UHURU is tired with BABU OWINO’s uncouth behaviour! Look at what he has ordered

Over the weekend, notorious SONU leader, Babu Owino, was caught on camera beating up his opponent, Mike Jacobs, over the SONU elections set to take place on 1st April 2016. 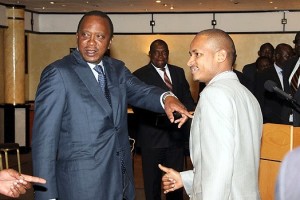 The incident that happened at a Petrol Station in Kilelshwa and then proceeded to within the precincts of Kileleshwa Police Station has caught the attention of President Uhuru Kenyatta who has ordered police to investigate it, arrest the culprits and bring them to book.

The Head of State told the Inspector General of Police, Joseph Boinett, that nobody is above the law in Kenya and wants all those involved arrested and arraigned in court.

Meanwhile, Majority Leader in Parliament, Aden Duale, has vowed to table a Bill in Parliament that will allow student leaders to only hold offices for only one year.

The move by Duale could bar perennial student leaders such as Babu Owino who thinks University of Nairobi is his mother’s property.

Babu Owino has been the SONU leader for nearly a decade.