DENNIS OKARI hints what may have led to his divorce with BETTY KYALO.

Dennis Okari  divorce. The blogosphere has been awash with reports that Dennis Okari’s marriage with Betty Kyallo has hit rock bottom six months after their lavish wedding that trended for two days and got every Kenyan talking.

There are rumours that Betty has already moved out of their matrimonial home and rented an apartment where she lives with her daughter, Ivanna.

As people speculate on what may have led to their break-up, Okari has hinted that jealousy and insecurity is one of the reasons that made their love go sour.

About four weeks, he posted a meme on instagram,  indirectly telling ladies not to keep on snooping on their men’s  phone.

This left some people speculating that Betty may have been insecure in their marriage and frequently snooped on Okari’s phone to see his latest messages.

This is what Okari posted on social media after breaking up with Betty. 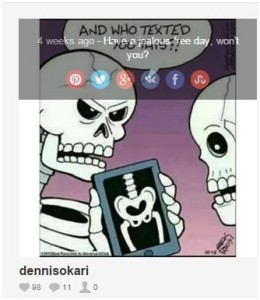