Govi of Machachari. When it first hit the screens, Machachari became an instant local television hit garnering a massive following and fans who could not miss a show. its characters, mostly kids, brought out an energetic vibe in the show winning the hearts of many. Among them, was Govi, a talented young lad who played brother to the ever mischievous Baha.

However, it seems like time has run out for the now grown star, Govi of Machachari who recently quit the show. Speaking during a media briefing, Govi of Machachari whose real name is Malik Lemuel revealed that the main reason why he quit the children’s show is that he intends to pursue bigger projects in Kenya and even bigger projects in Hollywood.

Govi of Machachari has set high standards for himself and he is currently building up on his YouTube profile through his YouTube channel to help him grow his brand. 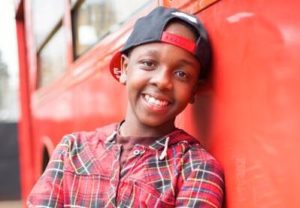 As he shapes his lustrous acting career, the former Machachari actor added that he will also continue with his education. Malik Lemuel who is now a form one student at Consolata High School is an above average student who is said to have scored an impressive B+ in his previous exam trial.