Joshua Sang. Former KASS presenter and ICC suspect, Joshua Arap Sang, has broken his silence over those who fixed him and Deputy President William Ruto at The Hague-base court.

This comes barely two days after the ICC dropped charges against them for lack of sufficient evidence to sustain the cases to the end.

Speaking on Thursday morning, Joshua Sang threw the delicate unity between Kalenjins and Kikuyus into further jeopardy by revealing how they were fixed by Kikuyus.

Joshua Sang noted that the cases at the ICC were politically motivated and that Party of National Unity (PNU) fixed him and Ruto at The Hague.

“I did not expect to be in that list. There are many people who were involved in taking us to the ICC. Those who fixed me know it, they have announced themselves, there is no need to repeat it,” said Sang.
According to Sang, the fixers tried all means to take them to the ICC, and later when they realized that what they had done was unfair, they worked hard to ensure the cases collapsed. 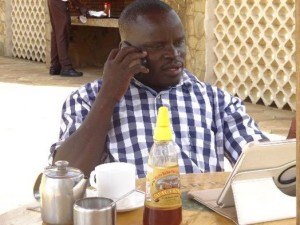 “Somebody like Moses Kuria came to our home to ask my parents for forgiveness. I have forgiven all those who fixed us and we are ready to build the nation,” he stated